O God,
you enlightened this most holy night
with the glory of the Lord’s resurrection.
Preserve the spirit of adoption
which you have given to all your people,
so that renewed in body and soul,
we may serve you in all purity;
through your Son, Jesus Christ our Lord,
who lives and reigns with you and the Holy Spirit,
one God, now and forever.

O Lord Jesus Christ, true God and truly human,
you do not change,
and you are holy in all your works.
Take all unbelief away from us,
and fill us with the gifts of your grace;
through your mercy, O our God,
you are blessed,
and live and govern all things,
now and forever. 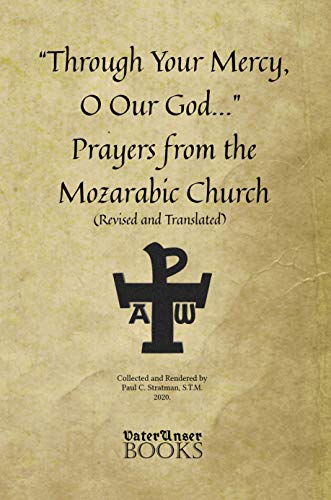 This book is a collection of prayers from the Mozarabic tradition. The Mozarabs were Christians who lived in Spain under Islamic rule. The prayers in the Mozarabic Rite are free in style and substantial in meaning. Most of the prayers also seem to be very direct in presenting gospel content. They are also very consciously biblical. Some of the Mozarabic prayers also have a definite structure. Sometimes the structure is similar to the parallelism in Hebrew psalms. Some prayers remind me of a modern bullet list. The content, structure and biblical foundation of the prayers give them a special beauty, along with deep meaning.

Available through Amazon for Kindle and in paperback.

When a congregation sees bold type, people instantly know that it’s their part and that they should read it. No announcement is necessary.

The lines of a serif font guide the eye in ways that sans fonts do not. I can’t recall seeing any worship book printed in sans.

Scroll through all our Lenten prayers at this link: https://acollectionofprayers.com/tag/lent/

Other Prayers and Collects for Lent

Enlighten our eyes, O Lord,
that our faith may be fixed upon you,
and our souls may take counsel
in the sweetness of your love,
and your fear implant
true penitence in our hearts;
through Jesus Christ our Lord.
Amen.

A Collection of Prayers
Powered by WordPress.com.