Join 364 other followers
Follow A Collection of Prayers on WordPress.com

Here is the English text from the Book of Common Prayer:

Glory be to God on high,
and on earth peace, good will towards men.

We praise thee,
we bless thee,
we worship thee,
we glorify thee,
we give thanks to thee for thy great glory,
O Lord God, heavenly King, God the Father Almighty.

Here is the text set to the Anglican Chant tune “Old Scottish Chant.”

An early version of the Gloria is found in the Apostolic Constitutions. The translation here is modified from Prayers of the Early Church, edited by J. Manning Potts, 1953:

We praise you, we sing hymns to you,
we bless you, we glorify you,
we worship you by your great High Priest,
alone as the true God,
the One Unbegotten,
the only inaccessible Being,
for your great glory,
O Lord and heavenly King,
almighty God and Father.

O Lord God, the Father of Christ
the immaculate Lamb,
who takes away the sin of the world,
receive our prayer.
You are seated above the cherubim.

Here is the English text from English Language Liturgical Consultation, 1988, which is the basis for most modern liturgical music. Some textual changes from the Book of Common Prayer were done to avoid some repetition of phrases, and to be closer also to the Greek text.

Lord God, heavenly King,
almighty God and Father,
we worship you,
we give you thanks,
we praise you for your glory.

Lord Jesus Christ,
only Son of the Father,
Lord God, Lamb of God,
you take away the sin of the world:
have mercy on us;
you are seated at the right hand of the Father:
receive our prayer.

The Gloria in Excelsis has been set to music thousands of times. Any piece of music called a Mass or a Divine Service would include it. Here it is from Bach’s Mass in B Minor.

And here it is in German by Michael Praetorius:

It is also been the subject of contemporary or folk settings. Here is a setting by Ricky Manalo:

And here it is in Latin as a Gregorian chant:

Along with settings of the prose texts and translations, the Gloria in Excelsis has also been paraphrased into the form of a hymn. Here is “Allein Gott in der Hoh, sei Ehr,” which has been used as the German Gloria since the time of the Reformation:

And here it is in an English translation from The Lutheran Hymnal, from Hymnary.org. 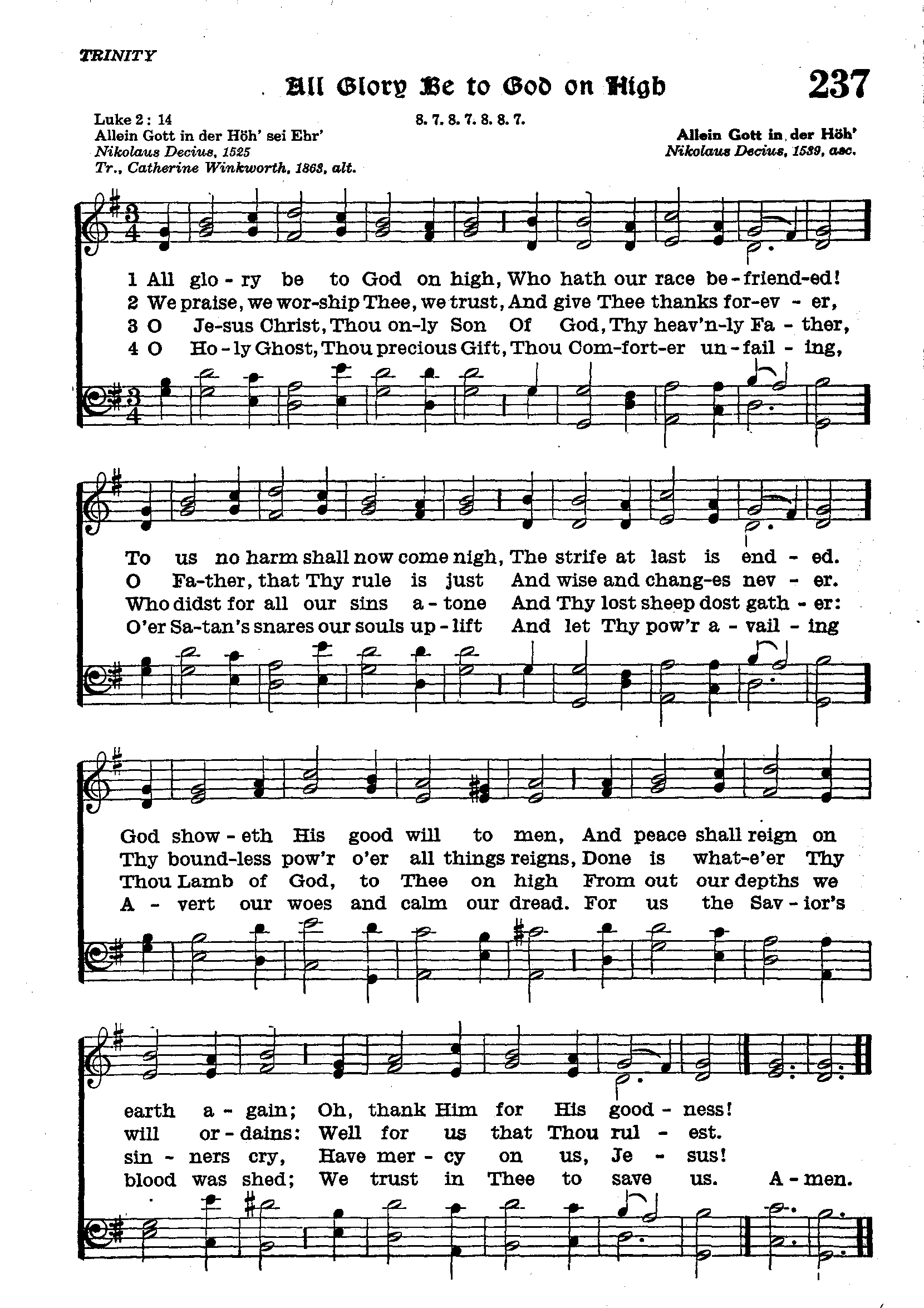